Ahhhhh.....May Day tomorrow!
Everyone move to the Left.
The first Question is:
How can you be in 2 places at once when you aren't anywhere at all? 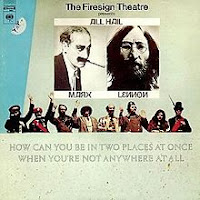 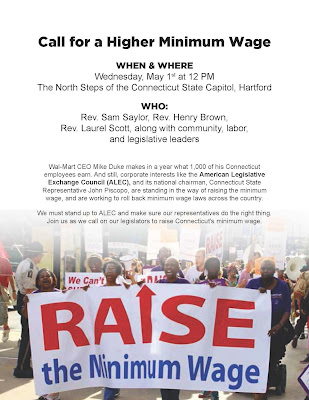 Please Join Us in Calling for and Increase in the Minimum Wage!

Join Governor Malloy, Lt. Governor Wyman, and faith, labor and legislative leaders as we stand together to call for an increase in Connecticut's minimum wage.

As low-wage workers fall farther and farther behind, corporate lobbying groups such as ALEC push legislation to scale back wages ever further. Raising the minimum wage isn't just the right thing to do for working families struggling to make ends meet, it helps build a stronger, more stable local economy. 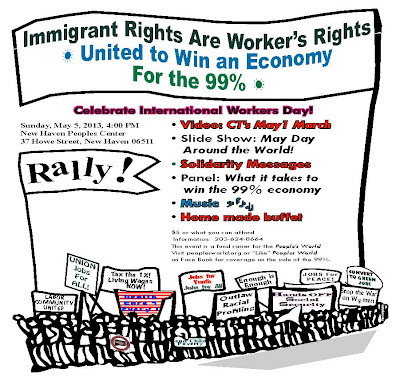 Wed May 1st at 5 pm on the New Haven Green.
Then...
<  Celebrate!
Sun May 5th
at the People's World annual rally with a video of the march, May Day Around the World, and a panel of leaders in immigrant worker organizing, jobs pipeline, organizing for environmentally sustainable peacetime jobs in Connecticut, and labor-community neighborhood organizing.

Have you ever known someone who touched every part of your life?
Have you loved someone across time and distance?
Share in the story of Melissa and Andrew as they grow together through the power of the pen!

The Milford Arts Center is great! It occupies what was once a train station (the other side of the tracks still has a waiting room area). The Milford Arts Council arranges for all sorts of musical events, photography and painting shows, plays, and more. Location (you kind of guessed it): 40 Railroad Ave. Milford CT 06460
Easy access by train! Or bus... or car... or bike...

WASHINGTON, DC—Congressman Jim Himes (CT-4) released the following statement regarding the Senate’s failure to pass legislation that would have made it more difficult for criminals and the mentally ill to purchase a gun. The bill – a bipartisan compromise crafted by Senators Pat Toomey (R-PA) and Joe Manchin (D-WV) – would have expanded existing background checks to gun shows and online sales, thereby closing an easily exploited loophole used by criminals to purchase firearms without having to pass a background check.

“I am outraged that the Senate failed to pass this commonsense legislation. With more than 90% of Americans supporting background checks, it is simply unfathomable that this obvious legislation did not garner the needed votes to pass the Senate and move onto the House of Representatives. The victims of Newtown – and the over 3,000 people who have been killed by gun violence since then – deserve better than that.

“If you cannot pass a background check, you should not own a gun. I am bitterly disappointed in this Congress' inability to pass commonsense gun violence prevention legislation, but I remain determined to work with my colleagues to ensure safer schools and communities for our children.” 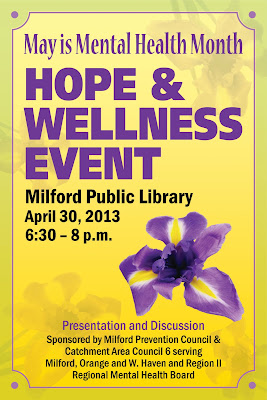 Mental Health is part of Health.
There has been a lot of discussion "post-Newtown"  about mental health. (Quote marks are because there is some discussion about not tainting the place name and instead calling the event "December 14th" but I am unsure if this is a movement by realtors to preserve property values or actually a true sentiment of the victim's families.)

Anyway, on April 30th, to kick off Mental Health Month, The Milford Prevention Council and Cachement Area Council 6 (part of the CT Dept of Mental Health and Addiction Services) are hosting an event at the Milford Public Library - and it is free. (also: Free parking behind the Library, bus stop nearby from Stratford and beyond and from New Haven - walking distance from Milford MetroNorth train station.)

Speakers include Michael Sernyak, M.D., CEO of the Connecticut Mental Health Center in New Haven, who will discuss the “health” crisis in mental health and how overall wellness can address it.

The Milford Prevention Council is a coalition of community professionals working together to prevent and reduce substance abuse among youth.  Community mental health and substance abuse treatment programs in Milford, West Haven and Orange comprise the Region II Regional Mental Health Board CAC 6.

Intrauterine devices (IUDs) are as safe for teenagers – including those who have never given birth – as they are for adults, according to research from the University of Texas Medical Branch at Galveston.

Published in the May issue of Obstetrics & Gynecology, the findings disprove concerns that have persisted for more than 30 years, since the removal of a harmful IUD from the market in the 1970's, and open the door for many more women – teens included – to benefit from the highly effective, long-lasting form of contraception.

"Today's IUDs are not the same as the ones that existed decades ago and are undeserving of the outdated stigma they carry," said lead author Dr. Abbey Berenson, Director of the Center for Interdisciplinary Research in Women's Health at UTMB. "Modern IUDs are safe, cost-effective and provide years of worry-free birth control. Though more research is needed, this study shows that IUDs should be among the options considered to address teen pregnancy rates."

The researchers used private insurance claims from approximately 90,000 IUD users ages 15 to 44 to examine complications, failures and discontinuation rates. Results were compared by age and type of IUD – hormonal (LNG-IUS) and copper (CuT380A). Specifically, they sought to investigate whether teenage IUD users were more likely to experience such complications as dysmenorrhea (painful menstruation), amenorrhea (very light to no menstruation) or IUD failure.

Among the major findings:

IUDs have evolved significantly since the 1970s, when a popular IUD known as the Dalkon Shield was found to have grave side effects, including bacterial infections, septic miscarriages and even death. However, a pervasive stigma against IUDs has persisted among physicians and patients. The devices are recommended by the American College of Obstetricians and Gynecologists (ACOG), but many clinicians remain especially reluctant to prescribe them to teens for fear of serious complications – specifically the rare risk of infertility caused by IUD-related pelvic inflammatory disease.

"An IUD is a virtually effortless form of contraception, as it doesn't require remembering to take a pill at the same time each day," said Berenson. "Thus, increasing young women's access to this effective birth control could have a tremendous impact on reducing unintended pregnancies."

###
Posted by Jonathan Kantrowitz No comments:

Coolness!
Registration is now open for the 2013 Transgender Lives Conference to be held on April 27th, 2013 at the UConn Health Center, Farmington Connecticut.

Learn more every day -- become a smarter and better person.