Posted on March 28, 2012
One of the best things to come out of the recent difficulties between East Haven’s town government and its Latino community has to be the response of so many residents of good will who refuse to allow detrimental publicity to define their town.  Mike and Jacqueline Albis, two prominent East Haven residents, deserve tremendous credit for coming up with just the latest innovative way to promote tolerance, understanding, and mutual respect.

To help mend relations in town and demonstrate a faith and pride in their community, the Albises have created a scholarship program to support Latino students who graduate from East Haven High School.  Dubbed the “East Haven Unity Fund,” its purpose is to recognize Latino students who excel academically, participate in extracurricular organizations, and aspire to pursue higher education.  Three trustees will administer the fund, and East Haven High School’s Scholarship Committee will select the fund’s annual award recipients.

If you’d like to donate to this worthy cause, you may either send a check to East Haven Unity Fund, c/o Jacqueline Albis, 23 Edwards Street, East Haven, CT  06512, or contribute online by visiting its website, at www.ehunityfund.org.

Save The Date-April 28: CT Women 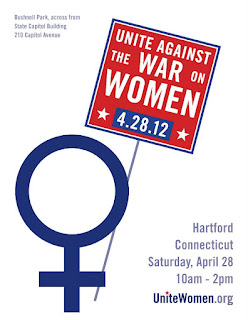 Not "Girls Gone Wild", this is a Rally to push back against the War on Women.

Women's rights are under attack, women and girls are treated as chattel and a negotiating tool in political discourse. The escalation of anti-female rhetoric and the very notion that there is an argument over bills to address violence against women cannot go unaddressed.
Men, please join the Women, Girls, Trans, and non-Gender-Binary people who will meet in Hartford at Bushnell Park on April 28th. The language and disdainful attitude of certain people in our society is not representative of how the majority of loving male friends, sons, husbands, brothers, fathers, grandfathers, partners, and co-workers view women.

This will be a fun and kindly show of solidarity for women, girls, and the men who know better. With a healthy dose of music, pamphlet distribution, buttons-stickers-Tshirts-and-Hoodies, conversation, voter registration, and whatever else may ensue.

Come join this non-Violent Fight against the "War on Women".
Please register online for updates or to volunteer your talents: Click Here
Posted by Tessa Marquis No comments:

Email ThisBlogThis!Share to TwitterShare to FacebookShare to Pinterest
Labels: women

Hood does not Equal Hoodlum, and Hoods Ain't Hats

Email ThisBlogThis!Share to TwitterShare to FacebookShare to Pinterest
Labels: congress

Virgin Galactic has been working on perfecting its second-generation SpaceShip Two prototype commercial spaceship, made primarily of carbon composites, for more than two years. Recently, Virgin Galactic test pilot David Mackay reportedly told attendees of the Next-Generation Suborbital Researchers Conference that the company hopes to perform suborbital tests of the spaceship during 2012.

Celebrate the 2nd anniversary
of the Affordable Care Act
Thursday, March 22 -- 4:00 PM
La Paloma Sabanera Coffeehouse
405 Capitol Avenue, Hartford
Featured Speaker:
Richard Kirsch
Author of
Fighting For Our Health
The Epic Battle to Make Health Care a Right in the United States
Richard Kirsch, a senior fellow at the Roosevelt Institute, spent three years on the front lines as head of the Washington, D.C.-based advocacy group, Health Care for America Now. He worked alongside other progressive organizations from across the country to defeat opposition from powerful insurance industry lobbies resulting in passage of the Affordable Care Act.
Copies of Kirsch’s books will be available during a book signing scheduled to follow a brief program during which the author and other speakers will talk about the high-stakes this year for states like Connecticut, where powerful vested interests are trying to hijack state reform. Kirsch and others will also discuss the upcoming Supreme Court hearings on the Affordable Care Act
For more information on the event, contact John Murphy murphy@ccag.net or 860.995.3389
To get involved in the fight for health care reform, log on to http://www.universalhealthct.org/
Posted by Tessa Marquis No comments:

The northeastern U.S. should prepare for a surge in Lyme disease this spring. And we can blame fluctuations in acorns and mouse populations, not the mild winter. So reports Dr. Richard S. Ostfeld, a disease ecologist at the Cary Institute of Ecosystem Studies in Millbrook, NY.

What do acorns have to do with illness? Acorn crops vary from year-to-year, with boom-and-bust cycles influencing the winter survival and breeding success of white-footed mice. These small mammals pack a one-two punch: they are preferred hosts for black-legged ticks and they are very effective at transmitting Borrelia burgdorferi, the bacterium that causes Lyme disease.

"We had a boom in acorns, followed by a boom in mice. And now, on the heels of one of the smallest acorn crops we've ever seen, the mouse population is crashing," Ostfeld explains. Adding, "This spring, there will be a lot of Borrelia burgdorferi-infected black-legged ticks in our forests looking for a blood meal. And instead of finding a white-footed mouse, they are going to find other mammals -- like us."

For more than two decades, Ostfeld, Cary Institute forest ecologist Dr. Charles D. Canham, and their research team have been investigating connections among acorn abundance, white-footed mice, black-legged ticks, and Lyme disease. In 2010, acorn crops were the heaviest recorded at their Millbrook-based research site. And in 2011, mouse populations followed suit, peaking in the summer months. The scarcity of acorns in the fall of 2011 set up a perfect storm for human Lyme disease risk.

Black-legged ticks take three bloodmeals -- as larvae, as nymphs, and as adults. Larval ticks that fed on 2011's booming mouse population will soon be in need of a nymphal meal. These tiny ticks -- as small as poppy seeds -- are very effective at transmitting Lyme to people. The last time Ostfeld's research site experienced a heavy acorn crop (2006) followed by a sparse acorn crop (2007), nymphal black-legged ticks reached a 20-year high.

The May-July nymph season will be dangerous, and Ostfeld urges people to be aware when outdoors. Unlike white-footed mice, who can be infected with Lyme with minimal cost, the disease is debilitating to humans. Left undiagnosed, it can cause chronic fatigue, joint pain, and neurological problems. It is the most prevalent vector-borne illness in the U.S., with the majority of cases occurring in the Northeast.

Ostfeld says that mild winter weather does not cause a rise in tick populations, although it can change tick behavior. Adult ticks, which are slightly larger than a sesame seed, are normally dormant in winter but can seek a host whenever temperatures rise several degrees above freezing. The warm winter of 2011-2012 induced earlier than normal activity. While adult ticks can transmit Lyme, they are responsible for a small fraction of tick-borne disease, with spring-summer nymphs posing more of a human health threat.

Past research by Ostfeld and colleagues has highlighted the role that intact forest habitat and animal diversity play in buffering Lyme disease risks. He is currently working with health departments in impacted areas to educate citizens and physicians about the impending surge in Lyme disease.
Posted by Jonathan Kantrowitz 1 comment:

Speaker Talks in Milford: Great Opportunity to meet Speaker of the House Donovan, Candidate for Congress

Below is the announcement for Tuesday’s event (tomorrow!) for Speaker of the House Chris Donovan's campaign for Congress, hosted by Milford Mayor Ben Blake, Planning & Zoning Board member Ben Gettinger, and Milford City Attorney Jonathan Berchem.


6:00 pm at the beautiful Bridge House Restaurant (49 Bridgeport Ave, Milford),  Please notice the great mural on the side of the building facing Stratford.

Ben Blake wrote: “Chris Donovan has been a great friend to Milford and we're excited about his candidacy. It should be a fantastic evening and I hope you can join us. ”
RSVP or for additional information: Ben at bgettinger@ltke.com

If you cannot attend, Checks can be mailed to:
PO Box 723 Meriden, CT 06450
Or, you can give online: http://bit.ly/4donovan
Or click on Chris Donovan's photo at right --> in the right sidebar.


Frankly, I believe you can pay whatever you can, and most any support is appreciated. Chris Donovan really is a good guy.
Posted by Tessa Marquis No comments: