Congratulations to the CT 2012 Legislature and the Governor

Today (actually, tonight in Italy) was "the official inauguration of the International Day of Cities for Life, started ten years ago in Rome with the Community of Sant’Egidio and supported by the World Coalition Against the Death Penalty. Special illumination of the Colosseum, “Testimonial for Life”, this year celebrates the abolition of the death penalty in Connecticut: the fifth American state to abolish capital punishment in the United States in the past five years (2007 New Jersey/2008 New Mexico/2010 New York/2011 Illinois/2012 Connecticut)."

Just watched the live streaming of the event. Very moving.

"The event in front of the Colosseum inaugurated the World Day of Cities against the Death Penalty, will be hosted by Max Giusti. Gospel music and readings of Dostoyevsky and Victor Hugo by Gigi Proietti against a singular background will turn Rome into the capital of the battle for life toward abolition of the death penalty, while at the U.N. in New York the final approval of the resolution for a universal moratorium continues. "


A study by researchers at the George Washington University School of Public Health and Health Services (SPHHS) indicates that full implementation of the Affordable Care Act would expand health insurance coverage for more low-income women, enabling more than a million women to obtain potentially life-saving screening for breast and cervical cancer. The study, “Health Care Reform and Women’s Insurance Coverage for Breast and Cervical Cancer Screening,” was published in a recent issue of the journal Preventing Chronic Disease.

In the past, many low income women without insurance could not afford screening tests for breast and cervical cancer such as mammograms or Pap tests. Such tests often identify cancer at an early, more treatable stage—before a tumor has spread and turned deadly. Right now, about 40,000 women per year die of breast cancer and another 4,000 die of cervical cancer.

The researchers created a model, based on results from Massachusetts’ successful health reform initiative, to estimate the number of low-income women in every state who would gain insurance coverage if federal health reform is fully implemented. They estimated that 6.8 million low-income women 18-64 would gain health insurance under health reform. Based on findings from a recent experiment of expanded Medicaid coverage for low-income adults, they estimated that about 500,000 more women a year would be able to get mammograms to check for breast cancer and 1.3 million more women could get Pap tests to check for cervical cancer.

“The Affordable Care Act could lead to major gains in screening and early detection of breast and cervical cancer,” said Leighton Ku, PhD, MPH, a professor of health policy and Director of the Center for Health Policy Research at SPHHS who led the study. “Those gains could result in faster treatment and better outcomes for women across the nation,” he said adding that the improvements come after a decade in which women’s cancer screening rates have remained stagnant.

Even so, 4.5 million low-income women will remain uninsured and could have great difficulty affording cancer screening costs on their own, the authors said. They note that such women will continue to need the help provided by the Center for Disease Control and Prevention’s breast and cervical cancer screening program, which offers uninsured, poor women access to screening tests and even referrals for follow-up care if a cancer is found.

“The CDC’s breast and cervical cancer program serves as a lifeline helping hundreds of thousands of uninsured women get the screening services they need,” said Paula Lantz, PhD, professor and chair of the SPHHS Department of Health Policy and a noted women’s health expert. Moreover, almost all states offer Medicaid coverage for cancer treatment if they are diagnosed under the CDC program.

The research study assumed that the Affordable Care Act is fully implemented. However, the Supreme Court ruled in June that the expansion of Medicaid, a major component of the federal reform law, must be optional for states and governors in states like Florida, Texas, Nebraska, Georgia, Louisiana, South Carolina and Mississippi have said they would resist Medicaid expansion. States that fail to expand health insurance coverage would be unlikely to experience these improvements in women’s health insurance coverage and cancer screening rates, Ku said.

The report was funded by the American Cancer Society and a cooperative agreement from the Centers for Disease Control and Prevention.

Posted by Jonathan Kantrowitz No comments:

Thank you to all the great volunteers and local organizers, who make the daily difference in elections and policy decisions in government.

Thank you to the Unions, who remind us every day what can be done when you work together. United we stand.

Thank you to good neighbors and Pooh 2 You to bad neighbors.

Thank you to Weather, teaching us to be strong and enjoy each day's unpredictabilities.

Thank you all.
Posted by Tessa Marquis No comments:

Prescient Postcard from England circa 1982 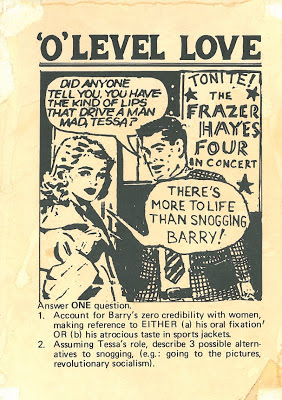 2 = My Role is, as always, to encourage people to Vote for Democrats and those endorsed by the CT Working Families Party and NARAL Pro-Choice CT!

(and no, I don't feel like explaining what "O" Level Love means. It's a Brit thing.)
Posted by Tessa Marquis No comments: