It took quite a bit of time to get around to it, but the American Academy of Pediatrics (AAP) has finally gotten around to making "the recommendation that the first-line contraceptive choice for adolescents who choose not to be abstinent is a Long Acting Reversible Contraceptive (LARC), which is an intrauterine device or a sub-dermal implant."

Here is some history, and today's new recommendation.

In 2011 The American College of Obstetricians and Gynecologists released the following statement:


June 20, 2011
Washington, DC -- Long-acting reversible contraceptive (LARC) methods—namely intrauterine devices (IUDs) and implants—are the most effective forms of reversible contraception available and are safe for use by almost all reproductive-age women, according to a Practice Bulletin released today by The American College of Obstetricians and Gynecologists (The College). The new recommendations offer guidance to ob-gyns in selecting appropriate candidates for LARCs and managing clinical issues that may arise with their use.

"LARC methods are the best tool we have to fight against unintended pregnancies, which currently account for 49% of US pregnancies each year," said Eve Espey, MD, MPH, who helped develop the new Practice Bulletin. "The major advantage is that after insertion, LARCs work without having to do anything else. There's no maintenance required."

IUDs and contraceptive implants must be inserted in a doctor's office. Two types of IUDs—small, T-shaped devices that are inserted into the uterus—are available. The copper IUD, which effectively prevents pregnancy for 10 years, releases a small amount of copper into the uterus, preventing fertilization. In addition, copper interferes with the sperm's ability to move through the uterus and into the fallopian tubes. The device can also be used for emergency contraception when inserted within five days of unprotected sex.

Women using the copper IUD will continue to ovulate, and menstrual bleeding and cramping may increase at first. Though data suggest that these symptoms lessen over time, heavy menstrual bleeding and pain during menstruation (dysmenorrhea) are main causes of discontinuation among long-term copper IUD users. Women considering IUDs should be informed of this adverse effect beforehand.

The hormonal IUD releases progestin into the uterus that thickens cervical mucus and thins the uterine lining. It may also make the sperm less active, decreasing the ability of egg and sperm to remain viable in the fallopian tube. The hormonal IUD may make menstrual cycles lighter and is also FDA-approved for the treatment of heavy bleeding. The hormonal IUD prevents pregnancy for five years.

The contraceptive implant is a matchstick-sized rod that is inserted under the skin of the upper arm and allows the controlled release of an ovulation-suppressing hormone for up to three years. It is the most effective method of reversible contraception available with a pregnancy rate of 0.05%.

Despite the many benefits of LARC methods, the majority of women in the US who use birth control choose other methods. Fewer than 6% of women in the US used IUDs between 2006 and 2008. According to The College, lack of knowledge about LARCs and cost concerns may be to blame. "Women need to know that today's IUDs are much improved from earlier versions, and complications are extremely rare. IUDs are not abortifacients—they work before pregnancy is established—and are safe for the majority of women, including adolescents and women who have never had children. And while upfront costs may be higher, LARCs are much more cost-effective than other contraceptive methods in the long run," Dr. Espey said.


In 2012 the American Academy of Pediatrics issued this statement:


11/26/2012 For Release:  November 26, 2012
Teen pregnancies have declined over the past few decades, but the United States continues to see substantially higher teen birth rates compared to other developed countries. A new policy statement by the American Academy of Pediatrics (AAP) discusses the use of emergency contraception and how it can reduce the risk of unintended pregnancy in adolescents. The statement, “Emergency Contraception,” will be published in the December 2012 Pediatrics and released online Nov. 26. According to the AAP, adolescents are more likely to use emergency contraception if it’s prescribed in advance.

Many teens continue to engage in unprotected sexual intercourse, and as many as 10 percent are victims of sexual assault. Other indications for use include contraceptive failures (defective or slipped condoms, or missed or late doses of other contraceptives). When used within 120 hours after having unprotected or under-protected sex, selected regimens for emergency contraception, such as Plan B, Next Choice, etc., are the only contraceptive methods to prevent unwanted pregnancy.

And today tthe American Academy of Pediatrics issued this statement:

9/29/2014
Over the past 10 years, a number of new contraceptive methods have become available. The American Academy of Pediatrics (AAP) continues to review and update its recommendations on contraceptive methods to provide pediatricians with the information they need in order to counsel and prescribe contraception for adolescents.

In an updated policy statement and accompanying technical report in the October 2014 Pediatrics, “Contraception for Adolescents,” (published online Sept. 29), the AAP recognizes the pediatrician’s role as a trusted advisor and source of sexual health information, and supports adolescents and their families to discuss and ask questions about sensitive issues such as sexual health and relationships.

According to AAP recommendations, pediatricians will conduct a developmentally-targeted sexual history, assess risk for sexually transmitted infections, and provide appropriate screening and/or education about safe and effective contraceptive methods.

Regardless of which method of contraception is chosen, pediatricians should stress that all methods of hormonal birth control are safer than pregnancy, allow adolescents to consent to contraceptive care, and become familiar with state and federal laws regarding disclosure of confidential information in minors.

New in this report is the recommendation that the first-line contraceptive choice for adolescents who choose not to be abstinent is a Long Acting Reversible Contraceptive (LARC), which is an intrauterine device or a subdermal implant.

The past decade has demonstrated that LARCs, which provide 3 to 10 years of contraception, are safe for adolescents. Pediatricians should be familiar with counselling, insertion, and /or referral for LARCs. Additional updates to the policy statement focus on patients with special health care needs, including physical or developmental disabilities, medically complex illness, and obesity.

It is important for pediatricians to regularly update patients’ sexual histories and allow sufficient time for follow up appointments when needed. Pediatricians are also encouraged to promote healthy sexual health decision-making, such as abstinence and proper condom use.

Posted by Jonathan Kantrowitz No comments:

Trumbull CT - CT Voters for Gun Safety, a statewide Independent Expenditure Only Political Action Committee organized to help elect candidates who support strong Connecticut gun laws, has finalized its endorsements for the November 4 statewide and General Assembly elections. CT Voters for Gun Safety has received enthusiastic support from leaders of the gun safety and violence prevention partners in our state. We are pleased to be joined in making these endorsements by a coalition of state groups including the CT Chapters of the Brady Campaign to Prevent Gun Violence, The Enough Campaign, The Greenwich Council Against Gun Violence, March For Change, Newtown Action Alliance, The Northwest Corner Committee for Gun Violence Prevention, and Women on Watch.

This coalition of gun violence prevention groups is also pleased to announce that they are joined by the Washington, DC-based Brady Campaign to Prevent Gun Violence for these endorsements.

CT Voters For Gun Safety is proud to announce its endorsement of Governor Dannel P. Malloy in his race for a second term as Governor of Connecticut. His leadership and courage following the tragedy at Sandy Hook Elementary School, and his determination to establish strong gun violence prevention measures in its aftermath, were exemplary.
[... removed rest of press release in order to get] 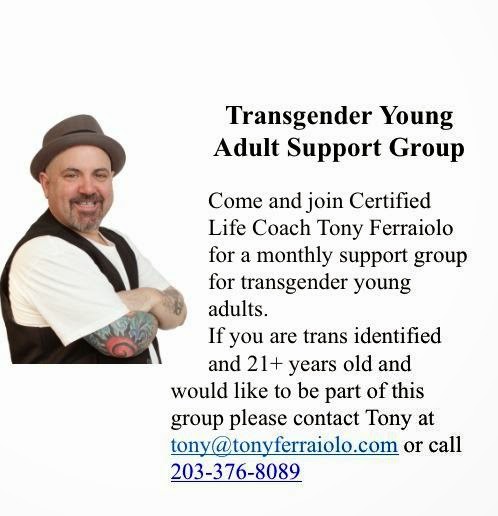 Tony Ferraiolo is co-Founder of the Jim Collins Foundation.
He is the subject of thee film A Self-Made Man.
He is included in the New Yorker magazine profile About A Boy.

Greatness walks among us.
Posted by Tessa Marquis No comments:

Toothpaste, socks, t shirts, all this is needed after the rape kit

Imagine yourself in the second paragraph of the flyer below.

Then return to the first Paragraph. 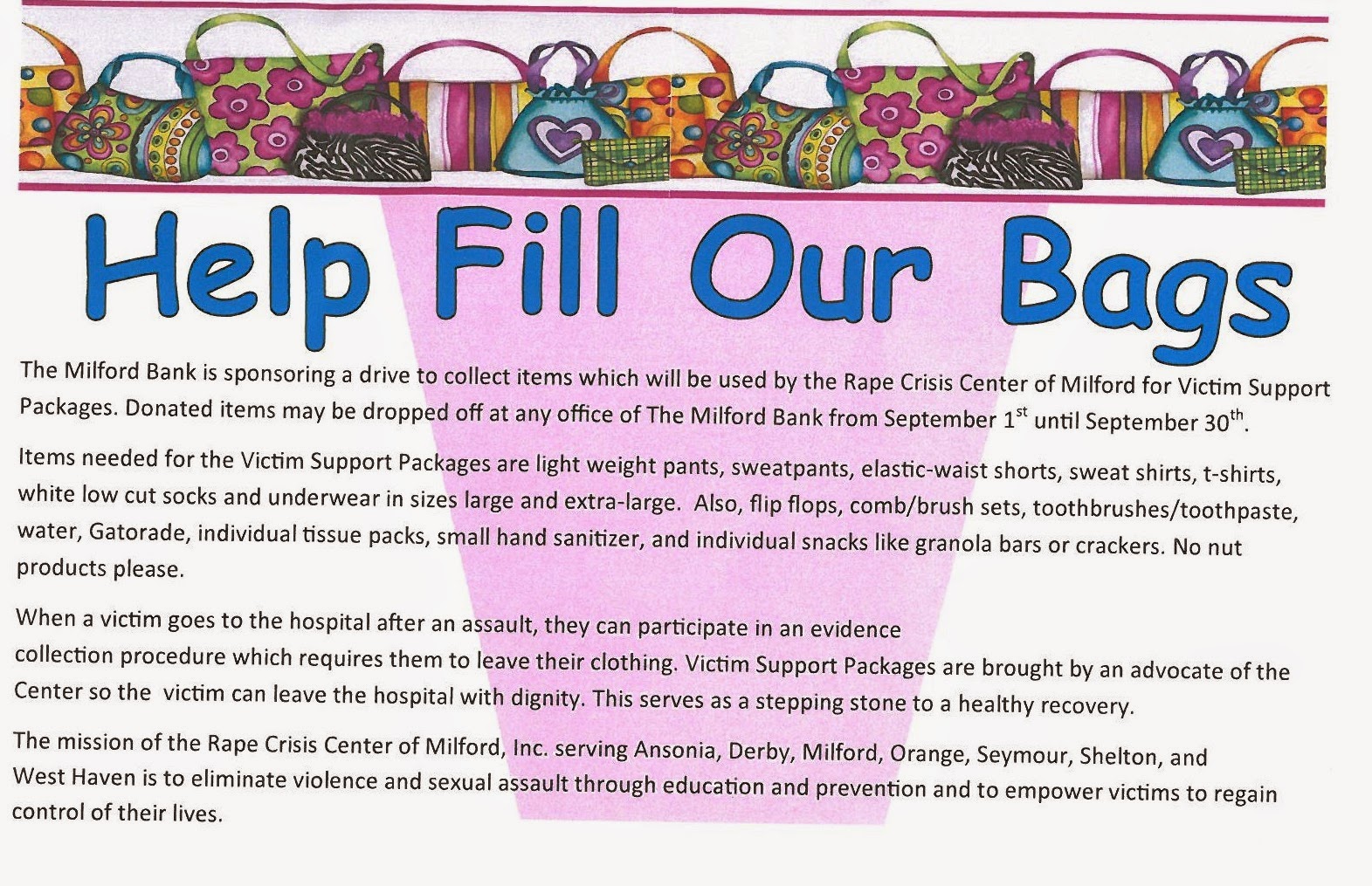