Five years ago Ned Lamont stood up against the status quo in Connecticut as the anti-war candidate for US Senate. This was considered heresy at the time. In fact (hard to believe now) it was considered "Brave", as though someone might punch you out if you were anti-Lieberman. 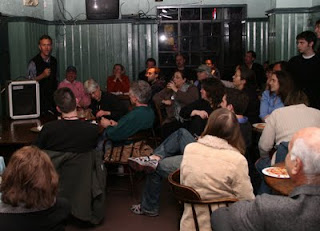 In April 2006 I was one of the group attending a meet-up at Naples Pizza (now Wall St Pizza) in New Haven. That's me in the center, gaining my religion.

The next 5 months were spent working on an election in Stratford and Ned's election. We ran phone banks out of our office in Milford and arranged events and further meetings for Ned in our area.  We went to nearly every event Ned went to, building crowds, gathering new volunteers, writing letters to the editor that nobody would publish, fighting with our local Democrats, and building the blogs to a roar. It was more fun than anyone had experienced since George Bush became president.

Ned's campaign for Senate changed things for a lot of people. It put Connecticut on a new map: The Progressive Map. Volunteers who were mere envelope stuffers became candidates for local boards and commissions. Some developed into campaign managers. Some gained new careers and nobody went away empty.

We may have lost, but we didn't lose.

Every year I say "Thank You For Running" to Ned Lamont.
Posted by Tessa Marquis

Email ThisBlogThis!Share to TwitterShare to FacebookShare to Pinterest
Labels: lamont